Call ‘8,000 Miles Across Alaska’ an instant classic of Alaska outdoors literature
“This book is not just a fascinating story of one man. It has some of the best descriptions of the Iditarod Trail yet to see print. It’s about an Alaska most Alaskans never see, and a Pennsylvanian who puts us all to shame. It’s an instant classic in Alaska outdoors literature. Don’t pass it up.”
— David James, Alaska Dispatch, February 28, 2015

Be Brave, Be Strong: A Journey Across the Great Divide is a book both simple and enormously complex, a story both nuanced and quick-reading, and an adventure narrative of both personal and cultural significance. As a sequel to Ghost Trails, it is both a spellbinding continuation of Jill’s development as a cyclist and as a person, as well as a major step forward in the integrity of her craft.  Most of all, it elevates the joy of suffering on a bike to high intrapersonal art.  Be warned, if you have any inclination towards long searching bike rides that idea will have been sunk much deeper by the time you finish this book.

Ghost Trails: Journeys Through a Lifetime is a well-written book that holds the attention of the reader right from the first sentence; however sometimes the craftsmanship shines through. Jill manages to capture the über-human effort it takes her to participate in this race and tells everything so beautifully and she should trust herself that her story telling is everything that is needed for the reader to understand that she is a (not so) ordinary girl achieving something extraordinary. 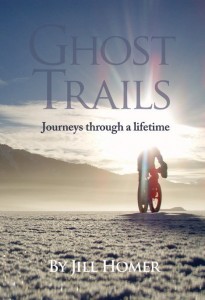 While Jill’s tale does credit to the amazing scenery, difficult trail conditions and extreme temperatures of the race, what she really excels at is letting us into her mind and showing us the mental fortitude required to complete such an extreme event. The chapters in which she describes how she reached this point in her life emphasize even more the strength she finds within herself during this race: she was not always an athlete, but instead grew into one in a way any one of us could emulate. In Ghost Trails: Journeys Through a Lifetime, Jill shows us what it takes to set a goal and work to achieve it.

Arctic Glass: Six Years of Adventure in Alaska and Beyond

“Arctic Glass: Six Years of Adventure in Alaska and Beyond” is a collection of thirty-three essays from “Jill Outside.” 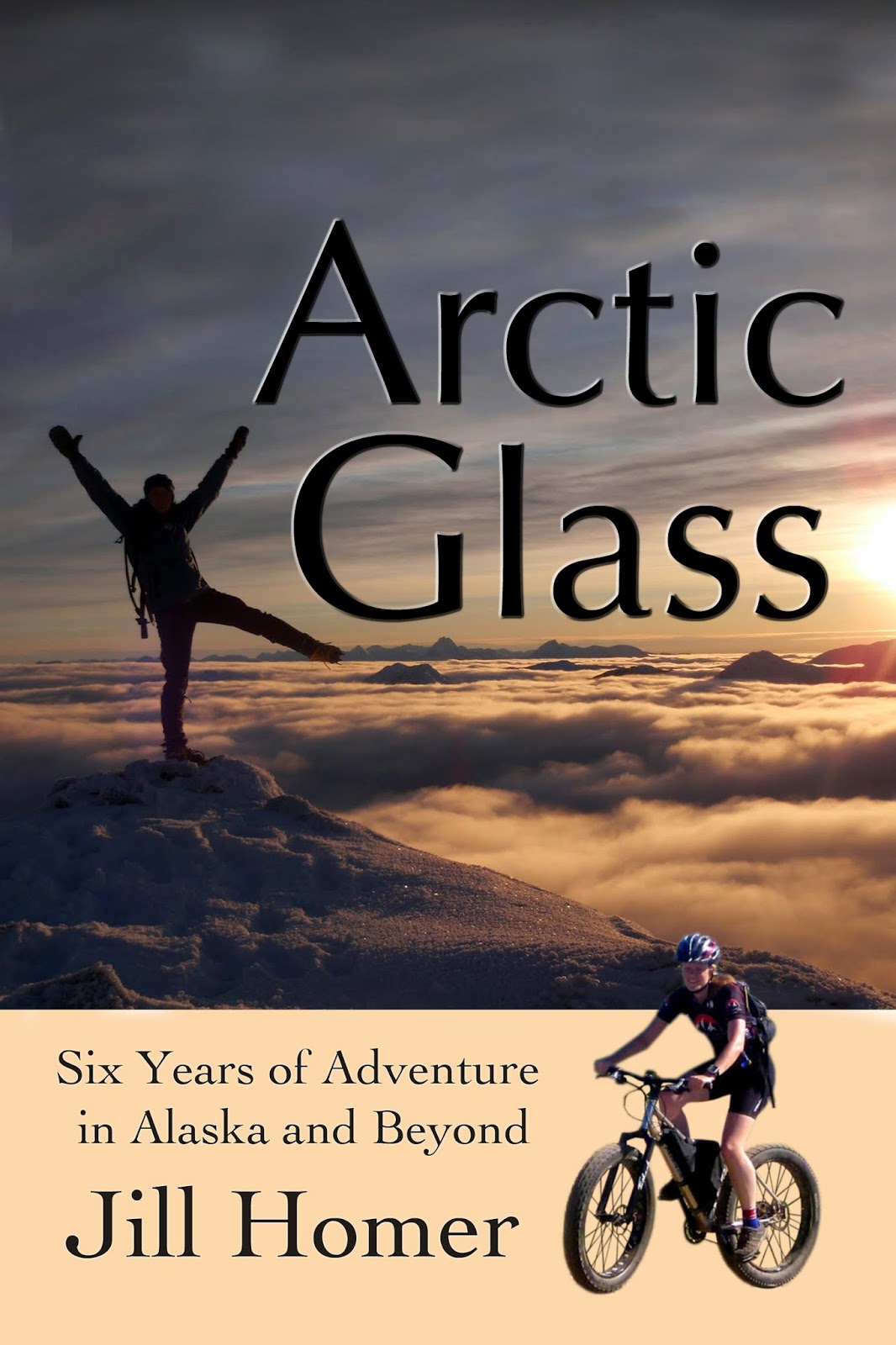 In 2005, Jill Homer launched her online journal, originally titled “Up in Alaska,” with the intent to document daily adventures from the perspective of a small-town journalist who recently moved to the Last Frontier.

Anecdotes about quirky Alaskan customs grew into musings about maintaining an active lifestyle during the long winters of the far north. Jill’s early accounts of cycling misadventures drew readers from all over the world, who were curious about the strange notion of “snow biking.” The blog quickly took on a life of its own as readers encouraged Jill to pursue a burgeoning interest in this esoteric extreme sport. What followed is a transformation that few could have predicted — Jill’s development into an endurance athlete who crossed 350 miles of Alaska’s frozen wilderness under her own power, went on to complete a 2,700-mile mountain bike race, and eventually took up ultramarathon-distance trail running.

This anthology compiles the best essays of “Jill Outside” from hundreds of posts that have appeared on the Web site, with commentary to provide a succinct timeline of events. The essays chronicle the adventures of an unlikely athlete who takes on harsh challenges in the frozen wilderness of Alaska, the Utah desert, and the Himalayas of Nepal. Endurance racing, overcoming seemingly impossible challenges, and self-actualization amid stunning outdoor landscapes are common themes in these compelling vignettes about “The Adventure of Life.”

“Be Brave, Be Strong: A Journey Across the Great Divide”

Jill Homer, a newspaper editor in the isolated, soggy hamlet of Juneau, Alaska, has an outlandish ambition: Racing a mountain bike 2,740 miles from Canada to Mexico along the Continental Divide. Her preparations for the Tour Divide are equally ambitious: A 350-mile winter bicycle race on Alaska’s frozen Iditarod Trail, followed by two months of focused training during a summer sojourn with her boyfriend in the Utah desert. 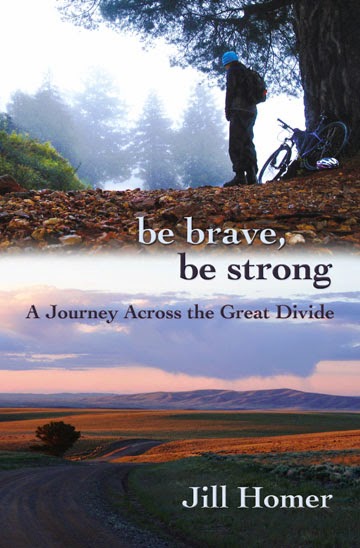 But in the tradition of best-laid plans, Jill’s dream begins to unravel the minute she sets it in motion. Less than twenty-five miles into the Iditarod Trail Invitational, Jill breaks through lake ice and suffers serious frostbite on her foot that forces her to drop out of the race. While she’s laid up on crutches and unable to train, Jill’s employer tries to coerce her into staying put. Then, just two days before they planned to embark on their sojourn, Jill’s boyfriend ends their eight-year-relationship. This final dismantling of expectations causes Jill to question everything she thought she knew about life, love and her own identity.

Despite a lack of motivation and overarching desire to do something more conducive to “getting on with her life,” Jill embarks on a series of training rides to prepare her for the rigors of a self-supported endurance race. She spends long nights huddled in a thin sleeping bag beneath a wash of stars, trying to reconcile her heartbreak and uncertainty.
Just days before the start of the Tour Divide, Jill travels to Banff, Alberta, where she meets kindred spirits who help spark greater perspective and new enthusiasm for a solo journey.

On June 12, 2009, she joins 42 other racers at the start of the Great Divide Mountain Bike Route. Jill finds herself almost instantly in over her head, battling a deluge of loose gravel, rocky terrain, fatigue, violent thunderstorms, difficult route-finding, stream crossings, bear encounters, and seemingly insurmountable obstacles — and she hasn’t even pedaled out of Canada yet.
On the third day, Jill meets a veteran Divide racer named John. They agree to ride together for the day, which stretches into several days as John settles into Jill’s pace and Jill enjoys the company of a methodical, results-driven athlete who loves cycling but seems so much unlike her in nearly every other way.

They part ways in western Wyoming, and suddenly Jill finds herself facing nearly 2,000 miles of Rocky Mountains backwoods, completely alone.
The difficulties compound quickly. Mud and weather slow her progress, knee pains intensify, and a rear hub failure nearly strands her in the harsh desert of the Great Divide Basin more than one hundred miles from the next town. Brake failure leads to a painful crash in northern Colorado. Amid the mounting demands, Jill’s sense of civility wears away and her emotions become those of a child, raw and affecting.
But the adventure also swings toward the sublime, from the unconditional kindness of strangers to deliriously beautiful descents. Jill allows herself to believe the worst is behind her, unaware that the most jarring discovery still awaits.

“Be Brave, Be Strong: A Journey Across the Great Divide” is the story of an adventure driven relentlessly forward as foundations crumble. During her record-breaking ride in the 2009 Tour Divide, Jill battles a torrent of self-doubt, anger, fatigue, loneliness, pain, grief, bicycle failures, crashes, violent storms, and hopelessness. Each night, she collapses under the crushing effort of this savage new way of life. And every morning, she picks up the pieces and strikes out anew in an ongoing journey to discover what lies on the other side of the Great Divide: astonishing beauty, unconditional kindness, and boundless strength.

Paperback available on Amazon and Barnes and Noble.

“Ghost Trails: Journeys Through a Lifetime”

Jill wasn’t an athlete, at least not in the more insecure corners of her identity. What she was, was cold. And frightened. And alone in the frozen wilderness of Alaska, more than a hundred miles from the nearest outpost of civilization. As she struggled to maintain forward motion, she couldn’t help but piece together the chain of life events that brought her here in the first place, to the Iditarod Trail, with nothing more than a bicycle and a few essential pieces of gear, in February. 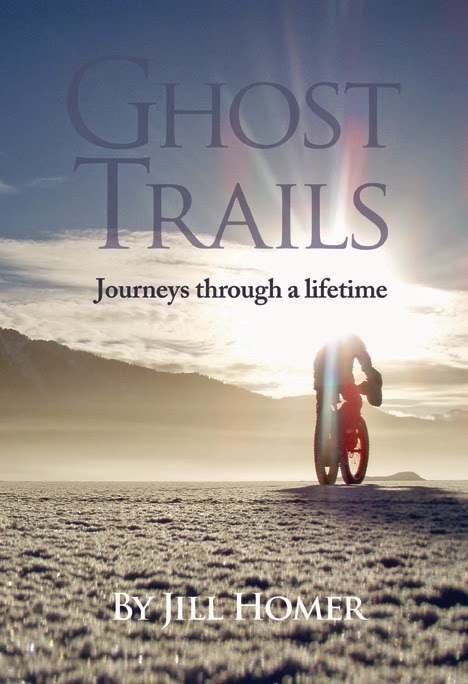 What possesses a timid Mormon girl from the suburbs of Salt Lake City, to sign up for the Iditarod Trail Invitational — 350-mile bicycle race across frozen Alaska? How was she possibly going to survive, let alone finish, this grueling adventure through the heart of her deepest fears? She muddled for answers from the wind, the mountains, the tundra, the faint trail she followed, and the ghostly trails of her memories.

“Ghost Trails: Journeys Through a Lifetime” is the inspirational journey of an unlikely endurance athlete locked in one of the most difficult wilderness races in the world, the Iditarod Trail Invitational. Through her struggles and discoveries in Alaska’s beautiful, forbidding landscape, Jill begins to understand the ultimate destination of her life’s trails.

“There is no ideology that can shield us from the searing wind, the frozen emptiness, and the desperate loneliness of a night in the Alaska Range at 20 below. And there are no words that can prepare us for the raw amazement, the sweeping beauty and the quiet joy spread across white, unbroken land. We find so much wonder it makes civilized life seem shallow, and so much pain it makes death seem kind. We find love we can’t express in a place so uncaring it breaks our hearts. We find that we’re stronger than we ever hoped to be and weaker than we ever imagined. We find that there is reason to hope, and there is always reason to hope, as long as weary hearts keep beating. And what we realize is that everything we were looking for was inside of us, all along.”